I wrote a piece for Juggling the Jenkins blog.  If she chooses it, it will go on the blog and in her new book.  We’ll see!  I thought I’d share it here because it’s a short version of my story.

I remember the first time I drank to relieve the pain that I was feeling inside.  My brother had died about 9 months before from suicide. His suicide was so painful because we were close AND because it was super gruesome and traumatic.  I wasn’t there when it happened, but I drove up to his body being brought out in a body bag. Also, I was the first person that my mom called and she screamed that my brother blew his brains out.  The room that he was in had to be stripped down to the studs. My parents wouldn’t leave so we had to be there, planning his funeral, while it was happening.

When I started drinking, I also had three kids, 4 and under, and I was going through postpartum depression (along with the grief).  I have also had generalized anxiety disorder most of my life. We were living with my in-laws (in a city that was foreign to me), and I was teaching at a very difficult inner city school.  I felt like my life was out of control. So, that rum and coke was amazing and relieved some inward turmoil that I had been feeling.

Over time, one drink became more and it just continued to grow.  In January of 2014 I ended up inpatient for being passively suicidal and they felt that my drinking was at an unsafe level (which I didn’t know until way later… they never told me that).  I was also having panic attacks regularly.

I quit my job and focused 100% on my self care and healing.  I started out with outpatient hospitalization then went to counseling 3 times a week and one of those days was with my husband.  I had terrible side effects to new meds and couldn’t sleep at night.

Over time I was diagnosed with bipolar 2.  My drinking continued to grow despite taking lots of meds that I wasn’t supposed to drink while taking.  I would buy a 12 pack of Blue Moon beer and drink most of it in a day. I didn’t do that every day, but I did drink every day.  I also drank a bottle of wine a lot of days. All of this helped relieve anxiety and depression. Sometimes I would buy rum or vodka.

I did feel that I was feeling better so I ended up getting a new teaching job only to have to quit AGAIN due to severe anxiety, panic attacks, and depression.  I went to an outpatient facility where they tried to convince me that I was an alcoholic but I wasn’t ready yet to admit that I had a problem. So I did the 3 weeks that my insurance would pay for and moved on, still drinking a lot.

Long story short, we moved to where we are now (a Christian camp where my husband is the maintenance director) and my drinking continued.  I tried homeschooling off and on (because we live 40 minutes from the school) and it caused so much anxiety and depression so my kids were in and out of school. I was suicidal again at one point and even though my counselor at the time thought I needed to go inpatient again, I didn’t want to.  I drank every day, usually starting in the morning. I would try to quit and couldn’t. I knew I had a problem at this point but didn’t know how to stop it.

One morning I woke up after driving drunk the night before to get more alcohol and throwing up multiple times that night which was common (at my parents’ house), and I knew I needed to figure something out.

I ended up at La Hacienda Treatment Center, which just happened to be an hour away (people from all over the US come to this treatment center).  My inlaws sent the money to pay for my deductible overnight and I was there the next day. My husband happened to be out of town when I decided to go in.  He was relieved but unsure of what was to come.

This treatment saved and changed my life.  I learned so much about addiction and alcoholism and was finally ready to admit that I was an alcoholic.  I learned that it wasn’t my fault and I could overcome with the 12 steps. It was a really hard month and honestly, the whole year afterward was really hard.  Trying to learn to deal with my mental illness without medicating it with alcohol was so so difficult. It took lots of counseling and finding the right meds.

I am happy to say that after so long of being miserable, I am happy and content in my life.  I’m on good meds that work for me, my family is in a healthy place (my kids are in school and it’s going well).  I feel like I can live a somewhat “normal” life. I have joy each day. Even the hard days are manageable. I have found some hobbies that I love and even started working a direct sales business and have grown because of that.

My friend and I also started a 12 step meeting in our tiny town.  Most of the time there are just 3 of us, but meetings only require 2 people!  There are so many addicts in the town, people are always going to jail and prison, and my friend even used to sell meth on the streets.  Our town is 1100 people. It was shocking to find how many people were using and addicted in that small of a town.

What kept me in denial is that I was a homeschooling mama living on a Christian camp.  I also saw posts and memes all over Facebook and Instagram about women who were drinking whole bottles of wine every day as if that’s normal.  That’s not normal.  I also thought somehow that I was better than many of the people in rehab because I didn’t drink as much as them.  But the behaviors are key. The behaviors show that I am an alcoholic (I met all of the criteria for alcohol use disorder).  And if I had continued, I would have been where many of them were. Alcoholism is a progressive disease! It only gets worse over time.

I stay sober today by working the 12 steps with a sponsor and each day.  I stay sober by serving other addicts by starting and leading a 12 step meeting.  I stay sober by taking good care of myself each day and focusing 100% on my sobriety and being the best me I can be!

She wanted before and after pics and it was hard finding a before pic that looked rough.  No one knew that I was struggling with alcohol and I looked “normal” and “fine.”  So this is the best I could do: 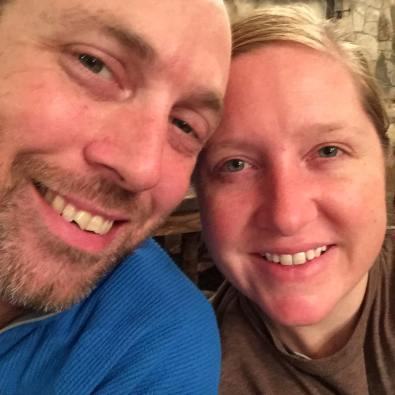